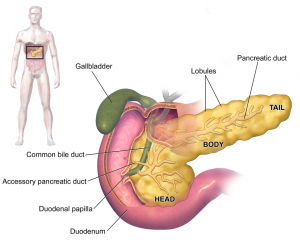 The pancreas is an elongated, somewhat flattened organ that is posterior to the stomach and behind the parietal peritoneum. It is attached to the first section of the small intestine (duodenum) by a duct, which transports its digestive juice into the intestine.

Pancreatic juice for digestion – the digestive part of the pancreas.

The pancreas and insulin – the endocrine part of the pancreas.

The pancreas is technically considered an endocrine gland although it has digestive functions. Endocrine refers to cells that secrete hormones. The Islets of Langerhan are the endocrine cells. These cells secrete three distinct hormone secreting cells: alpha cells, which secrete glucagon; beta cells, which secrete insulin; and delta cells, which secrete somatostatin. Glucagon is a protein that stimulates the liver to break down glycogen into glucose. It also converts non-carbohydrates, such as amino acids, into glucose if too much protein is supplied or not enough sugar is supplied in the diet. Glucagon also stimulates the breakdown of fats into fatty acids. Alpha cells will become overstimulated if the blood sugar gets too low because they are stimulated to release extra glucagon so the liver will produce glucose (sugar). Thus alpha cell weakness can be a sign of low blood sugar.

The primary focus of the Islets of Langerhan is really in the beta cells, which secrete insulin. Insulin’s job is exactly opposite that of glucagons. Insulin instructs the liver to convert glucose to glycogen and inhibit conversion of noncarbohydrates into glucose. In other words, glucagon stimulates the body to release more sugar into the blood, and insulin stimulates it to stop the release of sugar into the blood. Thus insulin decreases the concentration of blood glucose (sugar) and it promotes transport of amino acids into cells (needed for tissue-building and repair). They are not antagonist to each other, though; they work together to keep the glucose levels constant rather than allowing spikes, which could cause coma. Insulin is primarily released after a meal when sugar levels are high. Remember that all carbohydrates are sugar, so you do not have to eat sugar to initiate insulin release, but sugar-containing products like candy will surely initiate release as well. It is not good to have high sugar concentrations in the blood (hyperglycemia), so insulin is released so the liver will convert the glucose to glycogen, the storable form of sugar. This sugar is stored in adipose or muscle tissue. This is why sugar is actually more fattening than fat (see below). As insulin levels decrease, the liver does not convert the glucose into glycogen for storage, and this leaves more glucose (sugar) available for nerve cells. Neurons readily use a continuous amount of glucose for ATP production (energy). This is why low blood sugar can cause you to become shaky and lose mental capabilities temporarily, or constantly if you don’t correct it. Thus weak beta cells would tend to indicate a high blood sugar level (not metabolizing, probably due to amylase deficiency or liver weakness, or you just eat too much sugar).

Somatostatin is a hormone released by the delta cells. It helps regulate the secretion of glucagons and insulin so glucose metabolism stays at optimum levels. You might think of somatostatin as the sugar police for the blood.

NOTE 1: If the pancreatic juice cannot be released because of blockage, it creates a painful disease called acute pancreatitis. The trypsinogen backs up into the pancreas and digests part of it in this disease. Blockage can result from alcoholism, physical trauma to the area, gallstones, certain infections and as the resulting side effect of some drugs.

NOTE 2: Cystic fibrosis is a disease where toxins cause water to be drawn into the cells from the surrounding tissues. This leaves the tissues dehydrated, primarily in the lungs and pancreas. With no water, a sticky mucous is left which plugs secretions from the pancreas.

People have been taught that fat is more fattening than sugar, and, although fat contains nine calories per gram and sugar only contains four, excess sugar is converted to glycogen and stored in the muscles as fat. Fat is not what you need to avoid; sugar is, and, technically, if you eat sugar in the form of complex carbohydrates, the food contains the minerals needed to burn them up by increasing the metabolic rate. If you eat sugar in the form of refined sugar as found in cakes, cookies, candy, pie and most prepared foods (high fructose corn syrup), you are eating sugar with no mineral content, and it is simply stored as fat.

Suggestions to strengthen the pancreas