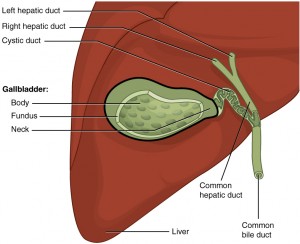 The gallbladder is a pear-shaped sac located in a depression on the inferior surface of the liver. It is connected to the cystic duct, which, in turn, joins the hepatic duct. The gallbladder has a capacity of 30-50 milliliters and has a strong muscular layer in its walls for storing bile between meals.

The gallbladder should be considered primarily as a holding sac for bile made by the hepatic cells of the liver. As bile is made in the liver, it flows through the hepatic ducts, into the common bile duct and on to the duodenum. Because the hepatopancreatic sphincter (opening to the small intestine) is generally contracted, the bile backs up into the cystic duct and into the gallbladder, making it nothing more than a holding tank for the bile made in the liver. The common hepatic duct and the cystic duct combined both dump into the common bile duct, which joins the pancreatic duct in the hepatopancreatic ampulla, which immediately empty into the duodenum through the hepatopancreatic sphincter. This sphincter remains closed or contracted unless the small intestine releases cholysistokinin into the blood, indicating the need for bile in the small intestine.

While the bile is in the gallbladder, the bile salts, bile pigments and cholesterol become increasingly concentrated as the gallbladder lining reabsorbs some of the water and electrolytes. The cholesterol is supposed to remain in solution, but when it does not, it precipitates and forms into solid crystals. These crystals become larger and larger, forming gallstones. Removal of the gallbladder is very common, but as you can see, it is nothing but a holding sac, so anything wrong with the gallbladder is really a fault of the liver or of dehydration. If the body does not have enough water, the cholesterol solidifies. You should know that depending on the operation, it is quite common for the gallbladder to grow back. The body must have a location to hold the bile, so if it does not, the liver will expand one of its ducts or tubules to forma a sac. If you are prone to getting gallstones, removal of the gallbladder will not inhibit that. They will simply form in the liver, which is much more dangerous long-term as stones in the liver inhibit normal function. With today’s diet and lifestyle practices, it is common for the average person to have hundreds and even thousands of gallstones.

The traditional gallstone removal program begins with a day of fasting. Apple juice and distilled water are the only things that should be consumed during the day. The day should not be a stressful day, either. At the end of the day, before going to bed, drink ¼ cup of fresh squeezed lemon juice and ¼ cup of cold pressed, virgin olive oil. Go to bed and lie on your right side so the gallbladder is in the best position to dump and stay as warm as possible. When you wake up in the morning, you should pass a bunch of green marbles. There should be no pain or discomfort. As stated earlier, it is common to pass anywhere from a couple to a couple of hundred. Whether you pass any or not does not indicate the presence of stones, though. If you do not pass any, there is more of a chance that your body was not ready to detoxify the liver than there is that you do not have any stones. If you have an unsuccessful gallstone flush, you should consider doing a liver flush first, but as you discovered in the liver section, it is wise to do a colon cleanse before you do a liver cleanse or at least know your colon is working well and the elimination channels are open.

Suggestions to strengthen the Gallbladder