One of the Best Snacks 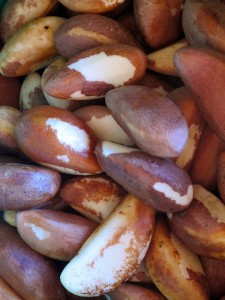 Call me nuts but I knew I was on the right track! Three Brazil nuts meet the vitamin E and selenium daily need…but I take selenium anyhow…it is so short in our soil and food. I mix a daily afternoon smoothie with three Brazilian nuts, a tablespoon of cashews, and a few walnuts.

Slash your risk for premature death with a simple snack switch

If I told you that making one small change to your snacking habits could literally add YEARS to your life, you’d probably call me nuts, right? But if you did you’d have to eat your words because a new study proves it’s true.

It turns out cracking open some nuts could help you add candles to your birthday cake, because according to new research people who eat nuts live longer than those who don’t.

Over the 10-year study period, nut eaters had a 23 percent lower risk of death from any cause when compared to folks who didn’t eat nuts. Remarkably, regularly eating nuts was shown to slash the risk of death from neurodegenerative disease by 45 percent, respiratory disease by 39 percent and diabetes by 30 percent.

Nuts also cut the risk of everything from heart disease to stroke to cancer, according to the study in the International Journal of Epidemiology.

If this were the first and only study of its kind, I’d call it interesting — but I’d also admit that it might be a little nutty to believe it so quickly.

But it’s far from the first.

It’s a remarkably consistent number that keeps popping up in study after study.

That said, there are of course a few catches to a healthy nut habit.

First, the newest study didn’t find a benefit for peanut butter. The researchers believe it may be because peanut butter can have added salt and vegetable oil, but I suspect the fact that it’s often eaten on white bread and with jelly also plays a role.

Second, the protections come from eating a very small amount of nuts a day about 10-15 grams, or a handful and no more. Since nuts are high in calories, it can be easy to eat too much.

And third, while eating REAL nuts pays off tossing back the honey-roasted, flavor-coated, over-salted processed nuts most people snack on will backfire on you.

Choose to snack on the real deal, and resist the temptation to overeat, and nuts are an excellent snack option that very well could add years to your life, and there’s NOTHING nutty about that.