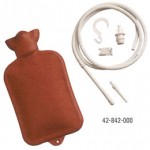 An enema is simple to do. You can buy a hot water bottle at most corner drug stores that come with a five or six foot hose attachment. The bottle comes with attachments for douching and enemas or can be used as a simple hot water bottle. For use as an enema, the hose is screwed into the hot water bottle and the enema tip to the other end of the hose. The enema tip is about the diameter of a pen. That is smaller than a normal bowel movement, so insertion of this tip into the anus (about two inches after lubricating with olive oil) isn’t as assaultive as it might sound. The psychological aspect is the only part that is hard for some people.

There are many types of enemas that can be used. Plain water, lemon in water, water with hydrogen peroxide, etc. One of the most effective enemas in terms of health benefit is a coffee enema. That is what we focus on in this article. Basically, an enema means you will be inserting a hollow tip into the anus. This tip is about the same diameter as a pen and is only inserted a couple of inches so the solution is delivered past the anal muscle into the rectum. You would lie on your back or your side (left side is best) and allow 1-4 cups of solution to run into the bowel at gravity fed speed. You hold the solution in the colon as long as possible. When unable to hold it anymore, you get on the toilet and release it. That’s it.

Directions For Making And Using A Coffee Enema
A coffee enema is one of the most effective methods of initiating bile production and flushing of the liver. The elements of coffee in enema form (theobromine, theophylline and caffeine) are absorbed in the hemorrhoid vein and taken up the portal vein, which serve the liver directly. Drinking coffee does not have the same effect, sorry. Enemas are often needed to assist the body in elimination of toxins from the liver, the body’s natural detoxification organ. Headaches, spontaneous sweats, bloating and healing crisis are all signs of liver congestion which would probably benefit from a coffee enema. Matter of fact, if you suffer with headaches or migraines, do a coffee enema when you first feel it coming on and it will generally stop all head pain!

Make 1-4 cups of brewed coffee, never instant, always brewed, organic if possible. You may want to start with two cups of coffee and dilute it with one cup of water that brings the coffee to temperature. Test the temperature on your wrist as you would contents of a baby bottle. It should be warm enough to relax the intestinal muscles, but not hot enough to harm the mucous membranes of the intestine. As you know you are able to handle the coffee, you can use up to a quart of brewed coffee with enough cold water to reduce the temperature to usable format. The higher the concentration of coffee, the greater the liver flushing abilities will be. The average recommended coffee enema is with about 4 cups of brewed coffee.

Place the solution in an enema bag (available at most corner drug stores). Hang the enema up above the level that you will be using it, but making sure the application tip will reach the location where you are laying. The solution is delivered into the colon by gravity. The higher you place it, the faster the solution will travel. You will want a slow traveling speed at first, but this can also be regulated by a valve on the enema hose. When the bag is in place, open the valve slowly to let the air out. When the coffee reaches the tip, close the valve, you are ready to begin.

NOTE: If you have never done an enema, you may find it difficult to hold the coffee in the intestine once it flows in from the bag. Until you know what your retention ability is, it may be wise to do your first enema in the shower or the tub in case you have an accident. It will be much easier to clean up there. 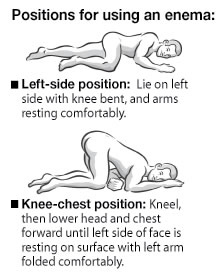 Position yourself in a comfortable spot. It is most effective to lie on your LEFT side, or to have your bottom up (rather than on your back) and bring the knees about half way to the chest. Once positioned, lubricate the end of the enema tip with some olive oil or other lubricant and insert the end of the tube about two inches into the anus. Release the valve slowly and allow the coffee-water to run into the colon until you start to feel full, then stop the valve. Retain as much of the coffee as you can, for as long as possible, then get up and eliminate in the toilet. Depending how much solution you used, you may need to repeat this process several times. Effectiveness generally requires at least a couple of cups held for several minutes although more experience can allow almost a court of water held for up to 20 minutes! If you can retain several cups for about 7 minutes, you should consider your enema successful.

If coffee enemas make you feel worse, DO NOT use them, they are over stimulating your body. An enema used daily, or several times a week can be used short term to relieve symptoms. Do not use long term or the continual stimulation will stress the liver.

This entry was posted in All About Cleansing At Home. Bookmark the permalink.